It looks like someone has found another SQL Injection bug in the vBulletin "Search UI". After taking a quick look @ the bug, I have determined it to be exploitable, pre auth.

The actual SQL Injection lies within the add_advanced_search_filters() function. This is due to vBulletin not sanitizing the "messagegroupid" and "categoryid" arrays before implode()'ing them directly into a SQL query.

Exploiting this issue is fairly straight forward, but is pretty much a blind SQL Injection as far as I can tell in the small amount of time I have looked at it. However, using the methods outlined here, one can easily extract data at the expense of possibly tipping off the database admin. This is because vBulletin displays the verbose SQL query within HTML comments whenever displaying an SQL error screen. (Even for non authenticated users)

The above post query will successfully display the passsword hash for the userid=1 within the comments of the SQL error page used by vBulletin, as seen in the example below.
And of course if you prefer to exploit this in a more stealthy manner, there is always a blind SQL Injection approach using timed BENCHMARK() queries, etc. that will likely work for you.
Posted by James at 1:31 PM 25 comments: 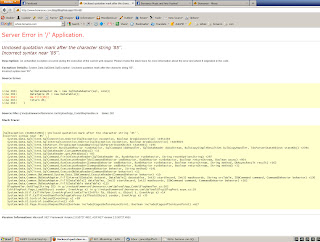 As you can see in the above image, I attempted to contact the bonaroo.com webmaster about this obviously exploitable SQL Injection bug, but to no avail. I guess the lesson here is that if you are going to write insecure code, at least remember to turn off detailed error reporting in a production environment. D'oh!
Posted by James at 3:49 PM No comments:

Last month an SQL Injection vulnerability in the vBulletin search feature was patched. The issue was researched fairly well by j0hnx3r, and his research was made public here.

After reading about this issue, I set out to write a Metasploit module for it, and soon realized that the way of exploiting the issue outlined in j0hnx3r's research could be unreliable under certain circumstances such as:
There are probably other scenarios that make exploiting this in a straight forward manner a bit unreliable, but I decided to focus my attention on creating something more reliable, versus exploring the limitations of a more straight forward approach.

During my research in to this issue, I found a couple of interesting things to help aid an attacker in mounting a successful SQL Injection attack against a vulnerable vBulletin installation.

As a result this issue can be exploited pre auth by an anonymous user regardless of CAPCTHA or flood settings, making it a pretty darn scary bug if you ask me. In order to exploit this issue I ended up using a blind BENCHMARK() enumeration approach since there are a myriad of issues relating to outputting retrieved data that I did my best to avoid altogether.

Last month, a critical SQL Injection vulnerability was discovered in Joomla 1.6.0. , and this past weekend I finally got around to taking a closer look at this issue, and working on an exploit. Originally I was going to write an exploit for both the 1.6.0 issue, as well as the 1.5.21 issue, and have the exploit select a target based on the version detected, but the original advisory was erroneous. It seems that the author of the original advisory used burp suite to discover the bug, and did not actually understand what was really happening at all, under the hood.

In the above image, we see two PoC examples given. They DO both trigger an SQL error, but this is simply due to the field(s) being null as the ordering paramaters pass through the Joomla "word" and "cmd" filter types, and are stripped of almost all special characters. (As seen in the example below)

As a  result this issue is simply not exploitable, so I was only able to create a working exploit for 1.6.0. The reason 1.6.0 is actually exploitable is due to the "string" filter being used in the example code below, which allows us to use certain characters necessary for exploitable SQL Injection.

In order to exploit this issue I use a sub query to ask boolean style questions. If the answer is true I execute BENCHMARK() and look for a delay, thus confirming the answer to our question. It should be noted that another useful exploitation approach (that is not as reliable in this situation, thus the reason i am using a sub query) when dealing with "ORDER BY" injections, is to use the sort order to determine the answer to your questions.

STEP 01:
Determine if the host is vulnerable by extracting  the version, and performing a simple compare. This step can be skipped if needed, as all the benchmark tests will fail if the host is not vuln.

STEP 02:
Trigger an SQL error in order to confirm that the host is vulnerable, and also extract the database table prefix for reliability purposes. SQL Errors are by default shown to unauthenticated users it seems, which helps make exploitation much more reliable.

STEP 03:
Prepare for BENCHMARK() enumeration by establishing both normal, and delayed request medians.

STEP 04:
Find a valid admin id in the "user_usergroup_map" table, which maps admin users to the group_id 8. Since this SQL Injection is completely blind we need to ask "boolean" questions. As a result we start at 42 (which is hard coded within Joomla as the base uid), and step through 10 at a time until we basically "pass up" a valid id. After the id has been passed, we step back 10 and start incrementing by one until we find the uid. This process repeats with the second record in the table if admin access is unable to be gained with the first uid that is enumerated.

STEP 06:
Extract the admin password salt via single character enumeration. We use "SUBSTRING(#{sqlf},#{i},1) LIKE BINARY CHAR(#{cchr.ord})" here vs "SUBSTRING = FOO" so that we can distinguish between case sensitive characters reliably.

STEP 07:
Cookie based authentication, and password reset functionality seem to be limited to standard, non admin, users. So we attempt to crack the password hash using a wordlist since it seems we can not use the SQL Injection to further escalate privileges, unless the mysql user has file access. (INTO OUTFILE) The encryption format used by Joomla can be represented in the following pseudo code:

STEP 08:
Extract the administrator username via single character enumeration after determining the length of the username.

STEP 09:
Authenticate as an administrator.

The above list is rather brief, but you can view the exploit source code for further comments, and insight in to exploiting this bug. The following exploit is in ruby, written for the Metasploit Framework.

Was just poking around some FaceBook DNS stuff and noticed that http://research.facebook.com/ redirects to the decipherinc.com homepage, which is a data collection and market research firm. Creepy!
Posted by James at 6:13 PM No comments:

For the last couple of days a group named Abysssec has been releasing a number of "0days" for their month of unpatched bugs event. Personally, I am not a fan of these types of events, and tend to lean more toward the "No more free bugs", but everyone has an opinion ...

Anyway, I finally got to sit down this morning and check out some of these issues out, and wanted to take a minute to make a correction to their research located @ http://www.exploit-db.com/exploits/14887/ which erroneously labels a fread issue as a file inclusion issue. Below is a small snippet from the  previously mentioned advisory.

This may confuse some people because the example given shows a url executing the "edit_css" branch while the "save_css" part is what is actually shown in their advisory. In addition to that minor discrepancy are a few more issues worth pointing out.

1] There are no checks for traversal sequences within "edit_css" at all, and that is why "..%2F" works to disclose file contents. A urlencoded character such as "%2F" is already translated into "/" by the time it reaches the affected code, and since a literal "%2F" is not translated during the fopen call you simply cannot bypass this with URI encoding.

2] This issue is NOT a file inclusion issue at all, and instead is a fopen/fread issue that allows an attacker to disclose file contents, and not actually "include" code that could be executed by the PHP interpreter.

3] The "save_css" bit is vulnerable to php code execution, which does not require any sort of directory traversal, due to a careless fopen/fwrite usage @ lines 73-75 of con_configuration.inc.php

I am not quite sure how this code execution bug got missed considering part of the actual vulnerable source was included in the original advisory.

4] To even reach the configuration functionality you must be authorized. However, using the Abysssec "add admin" CSRF bug this point becomes less of an obstacle for an attacker.

Also, thanks Abyssec, for using several code examples from my research without crediting me. I am glad that I could help ...
Posted by James at 7:42 AM No comments:

Recently, after joining a NING powered community I noticed that the functionality of the NING framework seemed to be a bit buggy. I first became aware of this after accidentally typing a set of double quotes into the member search, and realizing by the broken HTML, that a core component of NING seemed to be vulnerable to a simple Cross Site Scripting issue. Unfortunately, XSS bugs are fairly common, but can be especially problematic on community driven websites that rely on cookie based authentication, or have no CSRF protection.

After realizing there were some substantial problems I started to look around the site a bit more, and noticed that NING has user application functionality similar to most social networking websites. Also, NING allows the loading of unrecognized apps via a XML file located via a remote URL. NING apps are basically a combination of HTML, and JavaScript wrapped up within an XML file, so JavaScript execution within the context of a victim's browser is trivial.

This seems to be fairly unsafe at first glance, but applications are hosted on a completely different domain as a means to prevent cross domain based scripting attacks. However, if an attacker has an XSS bug available to them, cross domain policy usually becomes trivial to bypass, as seen in the images below.

Since a users apps are displayed within a page accessed via their public profile writing a NING social network based malware seems trivial at this point, and to make matters even worse the CSRF protection token "xg_token" simply does not work. (This point would be moot anyway due to the XSS bugs) It is also worth  mentioning that if an attacker wanted to write a really nasty piece of malware that would take over accounts, it would be fairly easy due to a flaw in NING that allows for a password to be updated without knowing the original, as seen below; and once an attacker knows the password updating the core account settings becomes possible too.

The end result of my research is a simple NING application based, self replicating malware named NINGA. This application is simply a proof of concept, and only seeks to spread itself. However, just about any action you can imagine would be possible such as mass messaging, data harvesting, account hijacking, and much more.

Unfortunately, there is no public bug reporting interface that I am aware of, and NING also seems to not have a security contact, (though, attempts were made to email security@ning.com)  so these issues are still present. Hopefully, someone from the NING development team will see this and work on resolving the multiple security issues affecting NING networks, before someone takes the time to write a more complex piece of malware that is created for nefarious purposes.